Not In The Kitchen Anymore: A Chat With Jenny


"Women haven't been in the kitchen in a long ass fucking time and women have been enjoying video games for a long time too."

At some point while perusing around Twitter I came across the website Not In The Kitchen Anymore (NKA). NKA reveals the side of the gaming community that is often hateful, offensive, and sexist. The side that the majority of us gamers despise yet it continues to exist. Of course my curiosity was peaked. I wanted to know more so I sat down and had a little chat with the sites creator, Jenny Haniver.

Not In The Kitchen Anymore stemmed from a college project. While working on her Bachelor's Degree in Fine Arts Jenny was given an assignment to create a physical representation of a social issue. Thinking of an issue that effected her personally was easy, "Since playing online I noticed getting into lobbies, as soon as I started using my mic and people realized I was a girl I would get flack."

Jenny recorded audio of her interactions with other gamers (mostly male), printed out giant banners of quotes from said audio, and created a welded sculpture holding two Xbox controllers. Pick up the pink controller, put some headphones on, and experience an online game from the perspective of a female; pick up the blue controller and hear a game from the male perspective. 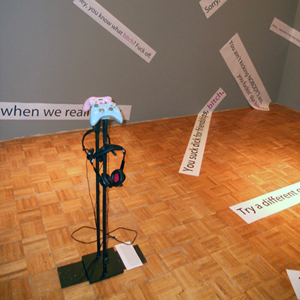 About a year ago, Jenny expanded on her project and started Not In The Kitchen Anymore. Take away the physicality of her installation and ba-da-bing you've got one excellent website: recordings (and transcripts) of gamers acting like complete ass hats and the casual, nonchalant  replies from Jenny. In fact, it often doesn't even seem to faze Jenny, she just keeps playing. "I will play even after someone says they want to rape me or refers to me as an it." In the worst case she says she just gets tired. "I get so tired sometimes because all I want to do is play the game."

For many it's not so easy to shrug off. The banter between gamers has gone beyond trash talking to a point where legalities kick in. Most women who have ever played a game online have been unfortunate enough to experience some form of sexual harassment. A majority of female gamers have also been exposed to some shit head threatening to stalk, kill, or rape them. One of the worst clips I've heard on NKA catches a gamer saying this: "JENNY. Let me fuck you in your goddamn ass and rape the shit outta you," continuing with "I’m gonna pull your goddamn pants down, and start butt-fuckin’ you," and finally "I’m gonna fuckin’ finger the shit out of your pussy ’til it bleeds."

Again, Jenny unfazed. But what does she really think? Simply put, she says "There's no need for that shit." Jenny deals with this buffoonery on a daily basis because it's part of running the website. She doesn't mute or block people because it's part of what she does. "It's kind of my social experiment. I have to submit myself to this shit for the good of the cause, I guess." And it's working. NKA is getting a lot of attention from some pretty big names. BBC, Kotaku, and PAX East to name a few.

I asked Jenny what she would suggest for females experiencing sexual harassment online. At first she hesitated, saying she was a bad example for this. However, clearly not true. I see her as a great example for female gamers as she is exposing an issue we can all relate to; she's doing something about it. So, she tells me "First of all to remember these guys are a bunch of morons, take everything they're saying not with not just a grain of salt but an entire fucking shaker," "It's not worth your energy getting upset over these people," "Laugh at them."

For some of us it's easy to laugh for others it's easier to cry. Totally kidding, but if the harassment gets so bad that you need to mute someone, do it. "The mute button is there for a reason. The problem's not solved but it's not there for the moment, you no longer have to hear it for the moment." Jenny also suggests to "take the time to file complaints." "If you don't use the system it's not going to work."

And who knows if it works. But, at least you're doing something and something is better than nothing. Beyond the individual Jenny believes gaming developers can have a better complaint system in place. "From my experience I've reported people who have said some pretty graphic things to me and a few days later they're still on Xbox Live."

Let's get on that now.

It was great talking to Jenny and it only made me appreciate NKA even more. As long as there are fucktards on XBL Jenny will be there pointing them out. So what's next for the website? "My ideal situation would be going to universities and speaking as a guest speaker for video game developers [or in] any type of classes on social or women's issues. I really enjoy public speaking and want to spread the word on this topic."

Please do Jenny, and let me know when you're speaking in Minnesota.

This article is featured on Future Retro Gamer (Soon).

Where Have I Been?

It's been months since I have blogged. Not without reason.

So, I figured I would post a bit of an update as not to cause panic.

I haven't simply stopped writing. Nope. I'm currently writing for an amazing website, NoobFeed. In doing so I believe I have expanded my writing skill and have been producing more quality articles. Check it out. If I enjoy it you sure as hell will too.

Anyways, I haven't abandoned blogging. My time has just been occupied by other things.

At that I will attempt to update my blog more often. Keeping it on the topic of video games but perhaps in more of a personal matter.
Posted by Unknown at 9:05 PM No comments:


Like I've said before, the majority of my interactions with other gamers have been positive. Unfortunately, I have experienced a negative side to online gaming. If you're going to talk shit do it right.

Keep in mind these are things I have heard while talking on my mic. I can take my dose of trash talk and playful banter but there is a line that can get crossed.

This is definitely something that can be said about both male and female gamers alike. However I'm not sure why a gamer would say this as it's insulting oneself. I don't live in my mother's basement and I do have real friends. It's OK if you don't though.

Another one where I think "Why?" In saying this you're not just putting me down you're also putting yourself down. Sure we're a bit lazy. We do sit on our couches for hours at a time but lets have other interests too?

Fat is in the realm of lazy. There are fat women and fat gamers. So yes there are fat female gamers. Must you assume I am obese?

2. Ugly and not attractive in any way.

There are very attractive female gamers. If you haven't figured this out by now Google it. Enough said.

This is number one for a reason. I've never been more turned off by online gaming then when I heard a fellow gamer discussing rape. Jokingly or not: NOT COOL. Sexual remarks as such should be off limits.

For some reason because I'm a female gamer I am also a lesbian. Must we discuss our sexual identities? I'm not assuming you're a straight male.

Things like this make me question if I should turn my mic on or just play it safe and keep it off. Let's be adults and keep our trash talk on the humane side. And if you're not an adult and speaking so obscenely maybe you should ask your mom what she'd think.

I recently asked my twitter followers to describe girl/female gamers in one word.


The majority of the responses that I received were positive:

Others certainly emphasized gaming as a gender neutral term:


Others I didn't quite know what to think of:


"If a girl gamer states her gender then you can't help but judge them for wanting attention."

So, what to think of these responses? Well clearly from this small sample of my Twitter followers (the majority being male) people think female gamers are pretty damn cool. Overall it would seem that female gamers generally have positive interactions with male gamers.

In my experience 99.9% of the time I receive praise and support for being a gamer. But there has been a handful of times where I have been insulted, degraded, and put-down simply for being female.

In part two of this blog post I will explore the typical negative perceptions of female gamers, why I believe this occurs, and how we can discourage this negativity.

This blog post is featured on Future Retro Gamer.

Who knew? There is such a thing as a female gamer.

Clearly we're all aware that girls play video games (I certainly hope so). And guess what a lot of them are pretty damn good. I'm not going to be the judge of my own gameplay but sometimes I'm pretty kick a** (Other times, not so much).

This blog post is featured on Future Retro Gamer.

They're everywhere! Seems like every time I turn on the television I hear another reference to a game, console, or character. Here are a handful of my favorites:


(They may not have things right and you're probably going to notice).


Video games have been referenced in the media as long as they've been around. Recently I've noticed a trend with referencing video games in music, especially hip-hop. There is a gaming/hip-hop culture mash that has been going on for years. I'm thinking it's just easier to rhyme with Xbox then to sing about it.

Here are some of my favorites:

Despite how Lil Wayne lives
It's not conducive to being creative
And I know 'cause he's my favorite
And I know 'cause I was off that same mix
Rationalize the shit that I'd try after I listen to dedication
But he's an alien, I'd sip that shit, pass out or play Playstation

I'm the cream of the crop, I rise to the top I never eat a pig cause a pig is a cop
Or better yet a terminator
Like Arnold Schwarzenegger
Try'n to play me out like as if my name was Sega


*It's not a PlayStation Controller*

Yeah I'm sorry, I can't afford a Ferrari,
But that don't mean I can't get you there.
I guess he's an Xbox and I'm more Atari,
But the way you play your game ain't fair.


Doesn't take much and that's messed up
Because these people do a lot of simple s*** to impress us
While everyone was trying to out-do the last man
I was just a ghost trying to catch some Mrs. Pac-Man


Album: B.o.B Presents: The Adventures of Bobby Ray
Song: Nothin' on You
Release: 2010

I’ve been to London, I’ve been to Paris
even went out there to Tokyo
back home down in Georgia to New Orleans
but you always still to show (still to show)
and just like that girl you got me fro (got me fro)
like a Nintendo 64 (64)
if you never knew well now you know (know, know, know)